Guess where we are? 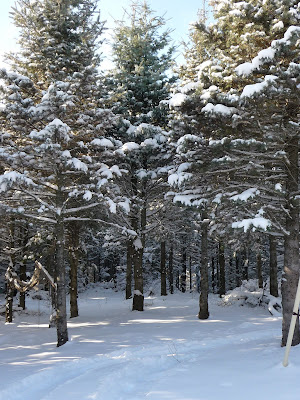 Home Sweet Home Wisconsin!
(My sister took this picture when they were here early Dec.. I took a picture of the yard today, but it's too depressing to post. Just think.. no sun and lots more snow)
We weren't planning on leaving TN until the beginning of next week. But a few things came up and we needed to leave sooner. Daddy was able to reschedule his schedule. So we left early Sunday morning. 5ish. We rolled down our driveway around 8ish last night. 15 hours of driving. The kids did well, considering we only stopped for gas and snag some food to eat on the road. In some ways it's nice to drive straight thru and get it over with. And in some ways it's nice to break it up.

Instead of going home to unpack and get settled in, we stopped down at Boppa and Gma's because 'JacobEmilyMeri' where there. I meant to get a picture of the kids seeing each other for the first time since we've been gone. But I had a half-awake John in my arms. Benji and Katie pounded on Boppa's door. Jacob answered. He squealed: BENJI!! And then, Benji squealed: JACOB!! They immediately locked into the biggest, longest, heartiest hug I have ever seen those 2 exchange! The porch wasOnce the girls were able to get thru the hug-fest it was repeated by Emily/Carolyn, Meri/Kaite, Emily/Katie, Meri/Carolyn.

It's safe to say the kids are THRILLED to be together again. It is nice to be home. To sleep in our own bed. To have our playmates back. Until we leave again. (And Mom and Dad were thrilled to have excellent roads and an uneventful trip... much unlike our trip down.. I'll post more about that later on my other blog)
Posted by Heather S at 1:51 PM

Glad you had a safe trip home. I feel your pain on making the 15 hour trip. I think we made it 10+ times the year and a half we lived down there. Sometimes we drove straight thru sometimes we broke it up, either way it is A LOT of sitting!!!!!!! I remember everyone being so excited the closer we got to TN and seeing the green fields, after we'd been to the frozen tundra. Enjoy being home!

15 hours isn't so bad. i thought it would be longer. glad the kids did good on the drive home.

Yeah, that is one scene I'm not going to forget for a long time. :)

There is no place like home! Enjoy all the comforts of what makes YOUR house..YOUR HOME!