When you have a hubby that writes, plays and sings you are always asked if any of your kids have his musical genes.  While none of them are music prodigy's, all of them have an interest in music.  From hammering on the keyboard, to strumming their lil guitar, to the squeaks of the fiddle, to the melody's they belt out during the day.  I'm not sure they have much say in the matter.  Music has been and likely will be a big part of their life.  Daddy's guitar and voice is a familiar and comforting sound to them (all of us actually).  From the moment they could hear in the womb, to laying as a tiny newborn on his lap, to dancing in the LR to his upbeat rhythms, to singing along to his CDs, to watching him perform.

While Daddy stays busy in his studio, he always makes time for a quick lesson or two.  Benji shows the most interest in actually wanting to learn.  The other kids just like to hear their voices come thru the speakers.  :)  While he's just beginning, he proudly gives concerts.  He gets his hat, western shirt, vest and boots on.  Tells us the concert is about to begin in the studio.  Then displays his bashful-yet-proud grin, then begins to strum. 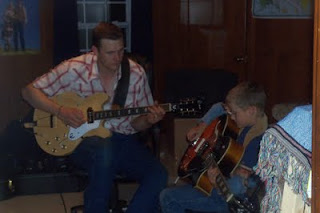 A boy has got to make his start somewhere. 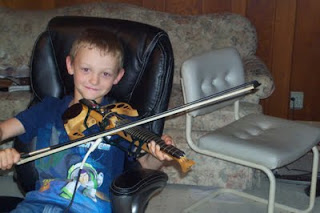 that is so cute!! :)
Last night Justin was giving Nolan some guitar lessons too

He is so cute Heather! He couldn't look prouder :)

I just love that regardless what your kids do, Daddy is sharing with them a piece of his everyday world. That they will cherish forever.

Awwwww!! The newest member of the band!! I think he'll catch on quick to playing. He's got a good teacher. :)