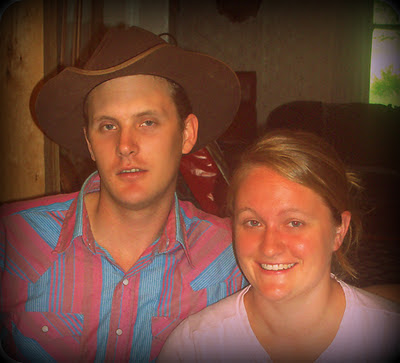 There are a few dates that will always stand out to me.  Days that have special meaning.  Days that will not easily be forgotten.  Nov 2, 2001.  It was 10 years ago this weekend that I travel 3 hours across the state to see this guy.  Although I had met his parents before (when his brother married one of my friends), I didn't really know them, or vice versa.  Although I have a feeling they knew plenty about me before I even arrived.  I knew his brother and sister some.  Mostly from the weekend up north in August.  (Another time we're not likely to forget).

I remember having butterflies as I drove.  Thinking "what if?"  (Those feelings disappeared the moment I stepped out of the car)  I remember his Dad and him were standing at the end of the walkway when I pulled up.  I remember his Mom hugged me.  I remember I brought a homemade carrot cake, that was my 'soon to be' father-in-law's favorite cake, unknown to me.  We went camping.   His parents, us, his brother/wife, his sister/husband and Annie (my in laws German Shepherd pup).  There was hunting.  (I quickly was made aware just what hunting means to men of this family.)  There was a evening at the local restaurant- just the kids.  There was much laughing and joking.  I remember feeling at home.  With Benjamin.  With the just being 'there'.  I called in sick (used an extra PTO day) to work Monday and drove home Tuesday morning (I worked 2-11 at the time).  We already had plans made to be together on my next weekend off.  And the next one, and the next.  Then a wedding date was set.   And the rest, as they say, is history.

I remember so much more from that weekend, but I can't find a way to put it into words.  But it's with a smile on my face and happiness in my heart I look back at the memories we've created: on that weekend and since then.  10 years later.  Still together.  And he's out hunting.. again.
Posted by Heather S at 4:18 PM

Sweet post Heather! Loved that you remember that day so clearly, its a lot like that when your world tilts off axis...you never forget!

Hope his hunting fills up your freezer!

Almost tears! Love these posts about love (Finding it all the way to growing old together)

Congrats, Heather! Amazing how clearly we remember when we found "the one"!

that picture better be in a frame. I love this post as well. VERY sweet!

very sweet - I remember the first time I met David too. I came home and told my Mom I met this guy that any mother would be proud for her daughter to bring home. But I didn't think I wanted to bring him home - thought he would be good for someone else. Then what happened 5 years or so later...I brought him home. Crazy how life happens. ;) Isn't it great!

So sweet it gave ME butterflies too! How awesome u guys found eachother!!!