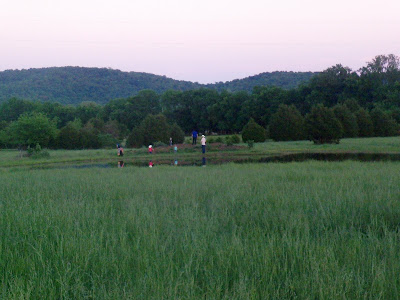 We the kids are lucky to have a fishing pond in the pasture behind our house.  Usually during every afternoon, they beg ask Daddy to take them diggin' for worms, so they can go fishin' later.  So far they've only caught smaller pan fish.  But size don't matter too much to them.  They have a blast no matter how big or small their catch! :)
*This picture is for Jacob...  Don't forget to note his new leather work gloves.. he wears them everywhere!  :) 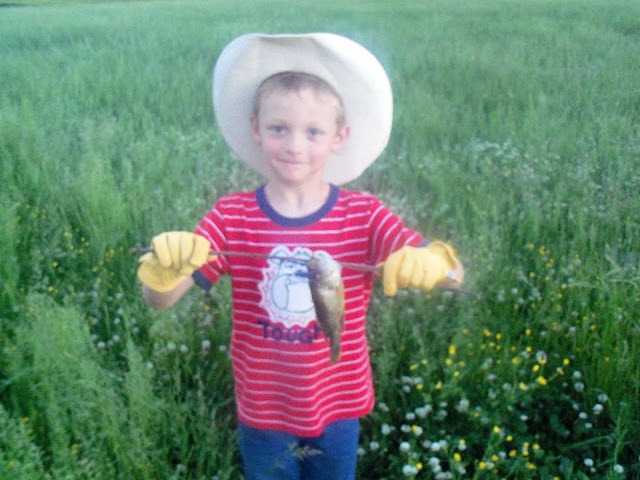 Now this (not-so-little-anymore) boy can reel in a fish like you wouldn't believe.. I should catch it on video.. he sees his bobber go under, yells:  Daddy!!!  BISH!!! (fish)  When he gets the okay to reel in.. he doesn't waste a second!  It's hilarious to watch him.  His hands are spinning like crazy.  He gets more excited as the line gets closer.  He's actually caught quite a few 'bish' himself.  Mom and (mostly) daddy bait the hook, cast it.. and he does the rest! (his shirt reads: "I get my handsome from my Daddy".. it should say I get my mischief from my daddy) :) 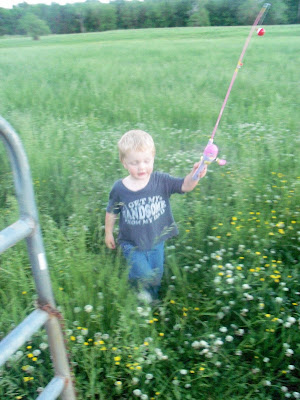 Benji let her carry his fish to the house (once I got his picture for Jacob first).  She took her job seriously.  Taking her eyes off of it, just long enough for me to snap a pic!  For a variety of reasons we didn't eat the fish.  But we didn't want to disappoint the proud fisherman.  So while Daddy kept the kids occupied... Mommy cleaned the fish (ahem, a little red flag goes up), then she fillet it (another red flag goes up), then she fried it.  The kids thought it was the best fish ever.  Mommy and Daddy thought it tasted good, but more like the best-leftover-grilled-boneless-chicken-breast!! :p hehee. The things we do for and to our kids... what they don't know won't hurt them... and if it makes them happy.. then so be it :) 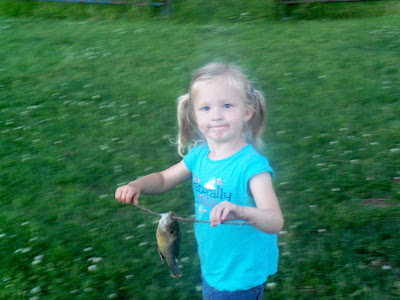 *grass in the mouth* 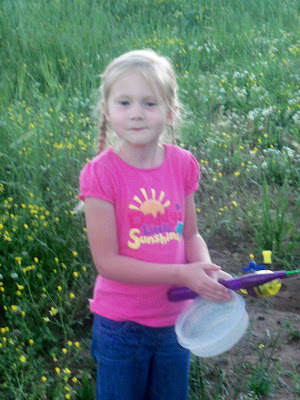 Remember Shell-e?  She had to let him go at the pond.  (Mom & Dad didn't want him living in a bowl in the house for some reason.  Even though they promised to watch him if he lived in the bathtub...)
Posted by Heather S at 6:00 AM

They are the cutest little fisherman I ever did see! The good thing at that age...it doesn't matter the size, just that they got one. Looks like fun!

Heather, I loved the fish story!!! Sounds like you all are making the most of living in TN part-time ~ sounds like a lot of fun!! :) Your children are adorable ~ love their grins!!

HaHaHa! go mom! The pictures are adorable Heather! Next time I get out to my BIL & SILs if you guys are home we should get together. :) Your kids are just soooo cute!!!

Now that is really LIVING at it's best...for the kids anyway. I would love watching the whole process... as the photographer....and then as the cook... ahem, of the chick--I mean FISH.

love,
Not really a fisherman
in
NE