Something to hold you over...

Boppa and Gma have a few cats at their house. And I think every cat had kittens at the same time. So the kids were in kitty heaven. Once the kittens left their mother were discovered by the kiddos...they got all the attention they could ever want TLC, and lots of it. (think 9 grand kids + many little kittens)
For the longest time, Katie wouldn't 'hold' the kittens. She'd 'walk' them... just like this. Now she's always packing a kitty around if she's at Boppa's house. 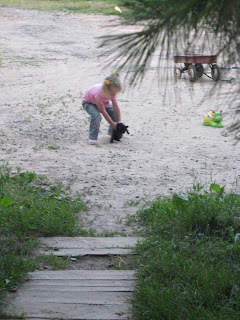 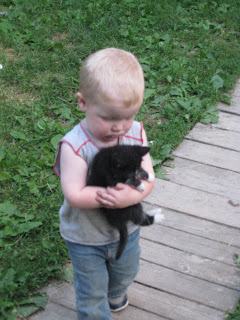 Actually he usually runs like this, with that same mischievous smile on his face- 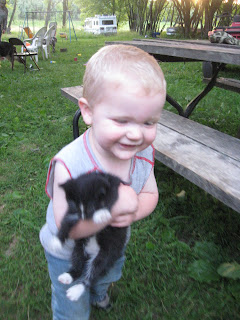 Until the kitty has had enough 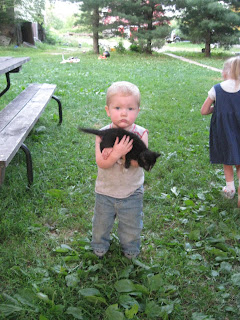 And runs for his dear life the porch 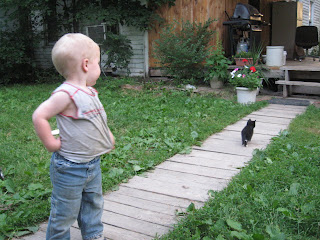 Ahh..the perks of living in the country with plenty of fresh air, space and animals to play with!

I forgot about this one... I tho't he had climbed out of his pack-n-play.. but only to find out Daddy put him in Benji's bed instead that day for his nap. But he was still proud he was able to walk out on his own. (And naturally, he smiled right after the camera snapped) 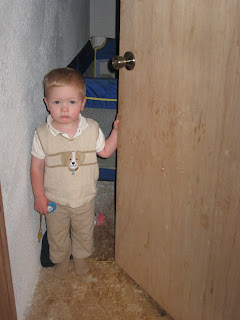 In between my list-of-things-to-do-after-a-long-trip I AM working on our trip pictures...

Great kitty pictures:) I love the country too. The last place we lived was basically "town"

Cute! I often wonder what they'd do without all the kitties, chicks, calves and so on to play with??

Love the picture of John watching the kitty run back to the house. Man, he's a cute little boy.

So cute with the kitties!