Like Father, like son.. this time it's a squirrel at the other end of his sights! (which got away, because Katie was barking like a dog... according to Benji anyways!) 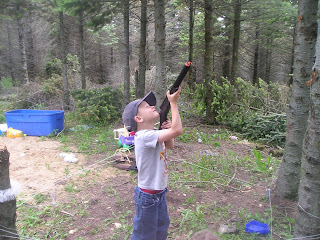 Daddy has learned a valuable lesson. Don't leave any tools laying around. EVER. One day when Jacob and Emily were here, the kids found his 'string tape/line' (whatever it's called. it's about 100+ ft, maybe of string rolled up in a tape measure thingy.. you know what I'm talking about right? Good!) Well. I figured it was broken, so he just 'let' them use it. Ahem, not the case, but too late to worry about that. They stretched out the ENTIRE length of it. Winding it around the pine trees and stumps by their sand area. 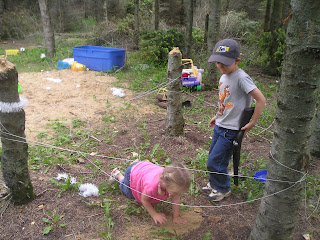 It doesn't stop there. The white string ended up being an electric fence for their horses (Carolyn, Emily, Katie and Meri). I should have done a video, because pictures don't do justice. But if one of those poor 'horses' touched that fence..it would make a 'horrible noise' (courtesy of the horses) and the horse would go crazy, then just like that tip over! Benji and Jacob were the cowboys of course. 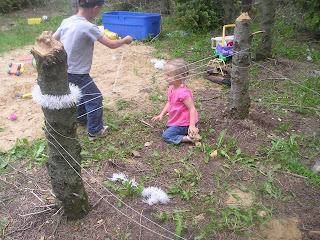 Some days I wonder...where in the world do kids come up with some of this stuff? They know all about electric fences because G'pa has cattle....but they still amaze me with their imaginations!
Posted by Heather S at 6:00 AM

I don't know what it costs to replace that measuring string thingy (although I should because we have several) but I say it was worth wasting it...that is so cute! What an awesome idea...and so creative and I bet they had oodles of fun!

The imagination of kids never fails to amaze me. You have the cutest horses around.

I told you he is his father's son. You will continue to be amazed by what your kids are going to come up with. Lots of wonderful memories.