John is known as 'Tubby' around these parts. I've learned some people don't like that we call him that, but I'm sorry to inform you, we don't plan on stopping just yet! :-) Look at him! He is built 100% like his Daddy's side. Big and tall. (His great G'pa was 6'9" & big and Daddy is 6'7", and I could go on and on. He stands a fair chance of carrying on the tradition.) In fact, Katie only calls him Tubby. I don't know if I've ever heard her call him John. He answers to both names: Tubby & John.
So the story continues. John was the last one eating breakfast (surprise!). While he finished up I combed the girls hair. In his own way he told me he was done. I was in the middle of a braid, so I proceeded to finish. (He was in full-view the entire time) He ever so casually proceeded to pull himself out of his seat. Not an easy task for him, considering the tray was pushed all the way up. He grunted...but finally.... 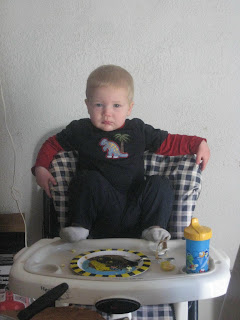 Mom: "John! What are you doing?"
John: Covers his eyes! (If you can't see him, he isn't being naughty, right?) 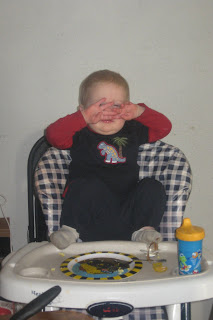 John: Well, Mom I told you I was done and you didn't get me out! So I took matters into my own hands. Now will you please get me down!? I'm DONE already! 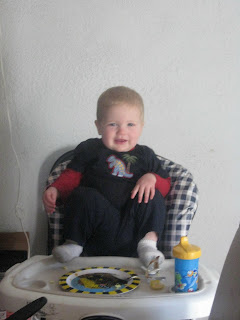 Next time- when he calls, I'll come a running!
Posted by Heather S at 6:00 AM

re: nicknames. Guess it would be different if he was 14 and way overweight and you called him tubby. I think it's cute.

I have a little one that covers her face when she knows she had done something she shoudln't have too...too cute!